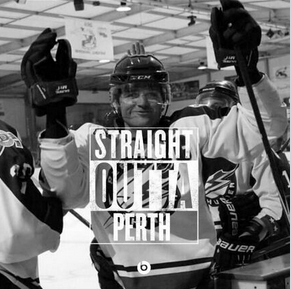 The hockey community in Perth would be most familiar with Sam Wilson as the Captain of the Perth Thunder. Alongside playing with the AIHL club since their inaugural season, Wilson has represented Australia numerous times and identifies representing his country in the Youth Team at the IIHF World Championships as a career highlight. Wilson achieved a Gold Medal with the National Team in 2003 and is known for his fast, aggressive brand of hockey, identifying the great Wayne Gretzky as his favourite NHL player. He will captain the Northern Stars in the 2015 Ultimate Ice Hockey Championship series. 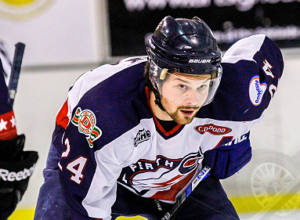 Andrew Cox is a familiar face in the Perth hockey community, having been alternate Captain of the Perth Thunder since 2012. As well as playing in the AIHL, Cox is also the alternate captain for the New Zealand Ice Blacks and has represented his home country in several IIHF world championships. He received Top Player and Top Goal Scorer titles at the 2014 Division II Tournament along with a Bronze Medal. In the NHL, Cox admires the Washington Capitals’ Alex Ovechkin. “He is fast, strong, has a great eye for the goal and a wicked shot” he said. Cox will act as Alternate Captain for the Northern Stars in the 2015 Ultimate Ice Hockey Championship. 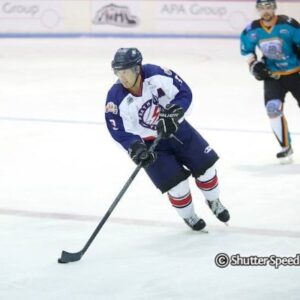 A veteran of the Perth Ice Hockey scene, Dave Ruck originally got into hockey in his home country of Canada before relocating to Australia. Since 2009, he has played, coached and managed teams, especially within the West Coast organisation and has played with the WA Superleague since 2009 and Perth Thunder AIHL squad since 2012. Ruck will act as Alternate Captain for the Northern Stars in the 2015 Ultimate Ice Hockey Championship.

John Caputo has played hockey, ice and inline, at both state and national level. 1991 saw John take his hockey playing abilities to the international stage, being selected for the Australia national youth team in overseas tournaments. John was also selected as the Coca-Cola junior sport star of the year in WA in the same year. John played for the Macquarie Bears (now the AIHL’s Sydney Bears) in 1993, helping them to the NSW Super League Championship. Several more years at Super League level in Perth and a Super League MVP award gave John experience at the elite level before he got the call up in 2000 to represent Australia once again with the Senior Men’s inline squad. The Australian team placed ninth in the world at the tournament which was held in the Czech Republic. In 2015 John was selected for the Perth Thunder AIHL squad, however had to withdraw due to a knee injury. 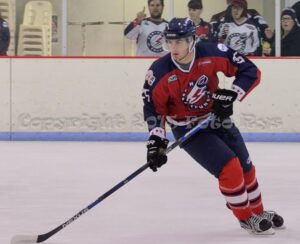 From age 11, Alastair Punler grew up on the ice, playing for the West Coast league right here in Perth. In 2013, he got the exciting opportunity to experience hockey in Banff, Canada before returning to Australia. Punler has represented both WA and Australia and has won Gold and Bronze medals at World Junior and Youth tournaments as well as playing for the Perth Thunder in the AIHL. Punler admires NHL guns Erik Karlsson (Ottawa Senators) because of his quick puck movement and offensive play, along with Jerome Iginla (Calgary Flames) “because I’m a Flames fan and he’s as tough as nails” Punler says. 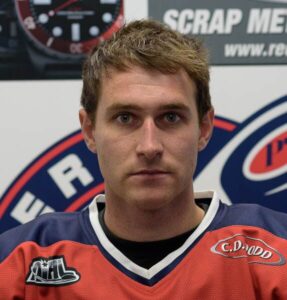 Anthony Nottle has experienced hockey at local, state and international levels and has a wide and varied hockey resume. Nottle has represented West Coast, NIHA and Hawks clubs here in Perth at Superleague level as well as playing for Australia
in the World Junior Championships in 2010 and 2011 in which he won a Gold Medal in the Division 3 tournament. Nottle has also taken his skills overseas playing Junior A divisions 2 and 3 in Helsinki. Back on home soil, Nottle has represented the Perth Thunder since 2011, playing in all four of their seasons to date. Always up for a laugh, Nottle considers his favourite NHL
player to be the Chicago Blackhawks’ Patrick Kane because in
his words “he’s super cute”. 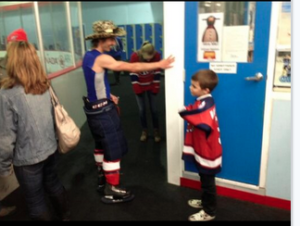 Rob Haselhurst began his hockey career playing Junior AA in Montreal, Canada and College Hockey at Lynden State College. Haselhurst player a season with the West Coast Flyers in the WA Super league and has played three seasons with the
AIHL’s Perth Thunder, appearing in two AIHL finals series’ in that time. As part of the AIHL, Haselhurst has received a nomination for the league’s top defence man as well as appearing in the 2015 AIHL All Star Game and Skills Competition, taking out the title of AIHL Fastest Skater. Haselhurst considers the Montreal Canadiens’ Brendan Gallagher to be his favourite NHL player because “he always works harder than the bigger guys and wins battles” Haselhurst says. 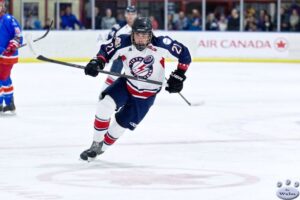 Lacing up the boots for the first time whilst living in Switzerland in 2009, Kieren Webster’s road to elite hockey has been rapid, playing at both state and national level. Webster joined the Perth Thunder in 2014 and after a stellar 2015 season, was awarded the AIHL Rookie of the Year. Webster identifies winning a bronze medal with the Australian National Junior Team earlier this year as one of his career highlights. Sidney Crosby was one of the first NHL players Webster ever saw. “The way he controls the pick around players and basically dictates how others play around him is just awesome” Webster said. 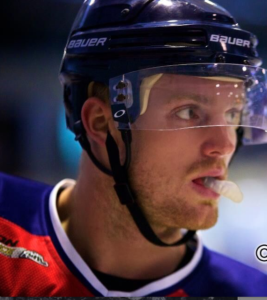 Born and raised in Perth, Jonathan Bremner is another player who has experienced 4 seasons worth of AIHL action with the Perth Thunder, having played 68 games for the club. Bremner’s hockey background also extends to inline, where he has represented Australia on several occasions at the World Championships. When following the NHL, Bremner identifies with Dallas Stars forward Jamie Benn. “He’s a powerful forward with good hands and scoring ability” Bremner said. He also gave a mention to former Detroit Red Wing Steve Yzerman. “He was one of the most complete players ever to play and was part of many great hockey moments” he said. 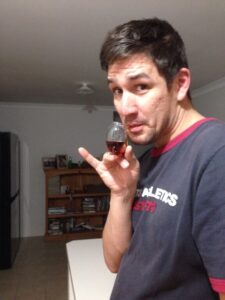 Simon Magiskan has played hockey from five years old, playing defence for most of his playing career. Playing in Canada until he was 21, Magiskan relocated to Australia and after a short break from the game, began playing in Brisbane in 2008. He then continued to play when he moved to Perth in 2012. Outdoor hockey practices were always a highlight for Magiskan. “You couldn’t stop skating because it was too cold” he said. Another highlight was taking the title of ‘Fastest Slapshot’ in the skills competition in his hometown arena. He also considers former Red Wings and Blackhawks enforcer Bob Probert as his favourite NHL player for one simple reason. “Who’s tougher than Bob” he said. 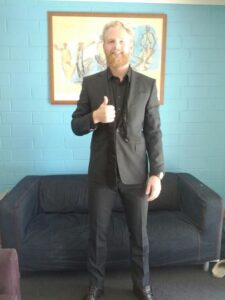 Hailing from Sweden, Per Daniel Goransson grew up on the ice from the age of 5. He played with the Swedish State and Regional teams and considers himself to have been very lucky to have been able to play Ice Hockey as his job. At aged 22, Goransson departed from hockey due to injury, however since coming to Australia,
he has found himself back in the game. Goransson grew up
admiring Swedish Detroit Red Wings star Nicklas Lidström. “It is difficult not to like the guy” Goransson said. “He owned both
blue lines, saw the ice like no other and had a killer shot” he said. 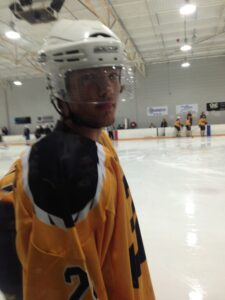 Playing hockey from the age of 12, Jordan Williams has a varied and impressive hockey resume. Williams has played for and captained WA for several national tournaments and was named MVP on a number of occasions. Williams also got the opportunity to play as
part of the U20 Australian Team that won the Bronze Medal in Jaca,
Spain in 2014. Williams says that when it comes to the NHL, he admires veteran forward and current Florida Panther Jaromir Jagr. “He is
known for his amazing fitness which has lead to his many trophies” Williams said. 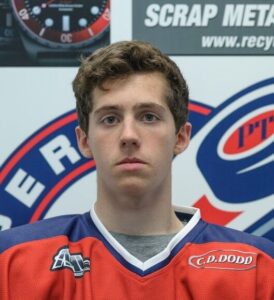 Lynden Lodge has experienced a lot of hockey for a young player. Lodge got a taste for international hockey, playing in Belgium at a young age. He has played for the West Coast Flyers and various state teams since moving to Perth in 2010 and made his
debut as a rookie on the Perth Thunder roster this season. Lodge’s career highlight thus far has been playing for the Australian
Under 18 squad. He considers the Chicago Blackhawks’
Brandon Saad as his favourite NHL player due to “his speed
and great hockey sense”. 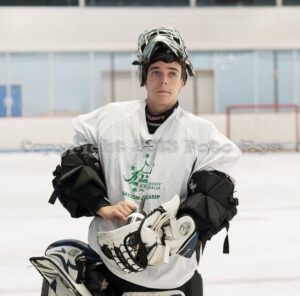 Mark McCann started playing hockey at the age of 7 and first put on the goalkeeping pads at aged 9, representing the Cockburn Hawks Ice Hockey Club. McCann has since represented WA since 2005 and stepped up as reserve goaltender for the Australian Youth Ice Hockey Team in 2012. McCann played in the Australian Junior Ice Hockey League in 2013 and 2014 before being selected for the Perth Thunder squad in 2015 as a Rookie Goaltender. Fittingly, McCann identifies legendary NHL goaltender Martin Brodeur as his favourite NHL player. 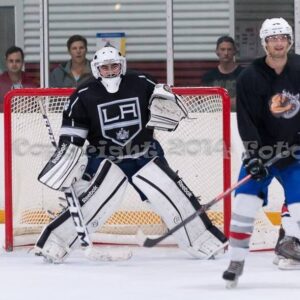 Dan Wilkinson began playing hockey as a goalie just 3 years ago and has spent as much time on the ice as possible, improving as much as possible. After posting some good numbers, Wilkinson was selected as part of the WA Brown squad in 2014 and in 2015 has played Superleague with the West Coast Flyers and acted as backup goalie for the Perth Thunder AIHL squad. His career highlights to date have been playing for a Gold Medal in a state tournament, playing in the Brown Squad and travelling with the Perth Thunder this season. When it comes to the NHL, Wilkinson considers several players to be his favourites “for a few different reasons” he said. 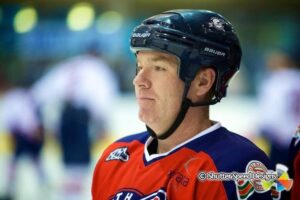 Richie Lamb began his hockey experience in the British Hockey League in 1989 with the Murrayfield Racers. The following ten years saw Lamb experience hockey in National Leagues across Scotland before joining the Ediburugh Capitals in the Bristish National League in 1999. In 2003, Lamb made his debut in the Western Australian Super Leage competition in Perth, Australia and went on to
play for the Perth Thunder from 2011-2014. In 2015, Lamb remained with the Thunder as Team Manager. Lamb has a wide and varied hockey resume and considers former Pittsburgh Penguin Mario Lemieux as his favourite NHL player.